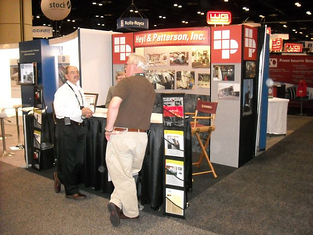 Power-Gen International 2010 is in the books.  Heyl & Patterson has exhibited at this conference since about 1998, and likely will for years to come.

Power-Gen was held in the Orange County Convention Center, which is massive.  To put things in perspective, the hall that held Power-Gen could hold two David L Lawrence Convention Centers from our hometown of Pittsburgh.  And that’s only one of four concourses (North-South-East-West).  That convention center even has its own zip code.

Overall, it was a good show for us.  We were able to touch base with a few vendors, meet with some current customers and introduce ourselves to some potential new clients.  And of course we attended Industrial Info Resources’ famous invitation-only party after the second day of the show.

Most importantly, we walked away with a prestigious award:  Power Engineering magazine’s 2010 Project of the Year, in the Coal-Fired category, involving our fluid bed coal dryers.  Eleven finalists vied for awards, three from the Coal-Fired category alone.  More details about the award will be posted separately, from the press release.

Now, we look ahead to Power-Gen 2011 in Las Vegas, Nevada…Heyl & Patterson’s booth space is already set.