Frigid Conditions Call for a Hammermill When Unloading Bulk Materials

The polar vortex is a year-round atmospheric cyclone centered over the North Pole, with low pressure centers stretching from northern Canada to Siberia.  It may seem to be a new term, but the polar vortex was first identified in 1853, along with an accompanying pattern over the South Pole.  In January 2014, a southward shift in the Northern Polar Vortex caused extreme cold over much of North America.  Minnesota became the coldest part of the United States at −37 °F, and even Texas experienced temperatures as low as 16 °F.  Such weather events can occur at least once a year.

In order to keep the energy grid and other businesses running, bulk materials must be unloaded even when the weather is bitterly cold.  As temperatures drop, materials such as coal, coke, lignite, iron ore and wood chips clump together as the water moisture they contain turns to ice.  In the case of coal, a load can freeze nearly solid if the haul is more than one day away from its receiving station.

Coal is treated with antifreeze as it is loaded into railcars, but that does little good by the time it arrives because it could be several days before unloading occurs.  The problem is in getting the material broken apart and flowing.

Clumped or frozen bulk materials are easily discharged with a rotary railcar dumper through the open top of a coal car, but not so easily through a bottom dump railcar's smaller chutes.  Bottom-dump cars must often spend time in thaw sheds to melt the ice holding their materials together, and allow the unloading process to be more free-flowing.  Most thaw sheds are gas-fired and are barely wider than the railcars they warm.  The heat transfer is radiant, which feels a bit like standing in the sun.  In cases of subzero temperatures, that may not be enough to reach the center of the car.

Multiply the time spent on that process by the number of cars in the train, plus the additional problem of getting the frozen hopper doors open.  One current solution is to use an open flame and levers to pry the doors open.  Applying an open flame mere inches away from a few tons of coal may not be the most reliable method.  Any rubber seals on the doors could also become cracked from the cold followed by the sudden application of heat. 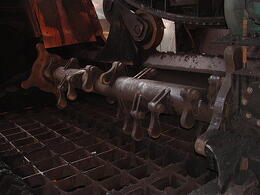 The traveling hammermill from Heyl & Patterson is a better alternative.  The hammermill relies on brute force to break up frozen materials, but is a safe and energy efficient means to do the job.  It is a proven method in cold climates worldwide, from Minnesota to Siberia.

The Heyl & Patterson design incorporates a series of 30-pound blunt head iron hammers that are pivot-pinned on a rotary shaft, which powers through even the largest blocks of frozen coal like a hot knife through butter.  The hammerheads are positioned to maximize crushing across the total area of the grizzly without clogging.  There are several drives for the rotary shaft and traverse drive, enabling the hammermill to travel in either direction under a rotary dumper, breaking apart oversize material while simultaneously cleaning the grate.  The drives are designed to be protected from the bulk materials dropped upon it, and the unit is stored at one end of the grizzly, out of the way during warmer months.

The hammer mill shaft travels speeds of 30 feet per minute under normal circumstances and three feet per minute in the most severe conditions.  It allows companies to continue their operations all 12 months of the year.  The traveling hammermill can be incorporated into a new installation or retrofitted into an existing facility.

For more information on how the traveling hammermill can increase wintertime production to achieve your goals, click here: 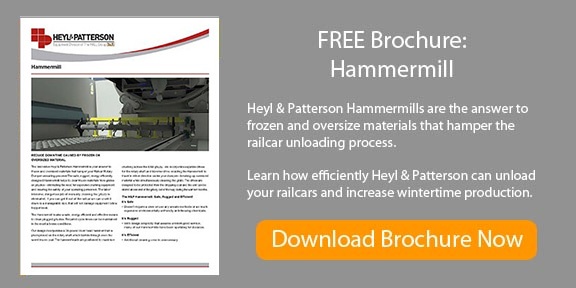