Move a Train Automatically and Efficiently Without a Locomotive

The sole purpose of a locomotive is to move a train along railroad tracks.  It has no payload capacity of its own, and it isn't a very efficient mode of transportation.  While it is an effective engine for powering supplies of bulk materials such as coal, iron ore, limestone and chemicals across the country, pushing individual railcars a few feet at a time into a rotary unloader is not the best use of its abilities.

Using a locomotive or even a smaller switch engine for that purpose is overkill.  It is as inefficient as using an entire can of bug spray to do away with one insect.

A locomotive sits and idles all day, uses up large amounts of expensive diesel fuel to move small distances and do relatively little. That isn't exactly environmentally friendly.  Also, the power plants and terminals that need to unload bulk materials usually do not use own their own locomotives.  The railroad does, and will likely be more than enthusiastic about letting the engine run at their customer's expense.

There is a faster, more accurate way, which uses the right tool for the job and is actually greener.  By using a device specifically made to advance loaded railcars into a rotary railcar dumper, a locomotive can be freed up to do what it was built to do.  The task of moving bathtub gondola railcars along short distances so their contents can be dumped is best accomplished with an automatic train positioner.

Heyl & Patterson has designed and manufactured train positioners for decades, and has been in business since 1887.

A train positioner is basically a carriage-mounted arm that travels back and forth along railroad tracks on its own parallel track system.  It is electro-mechanically propelled, and moves a coupled train through a railcar dumper and automatically positions the individual cars to be dumped. 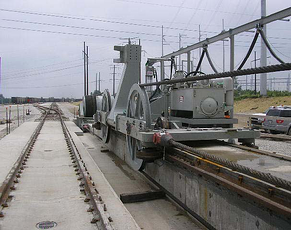 The train positioner's arm lowers over the coupling between railcars to position the train.  A holding device, either wheel chocks or a separate holding arm that engages the coupling, then locks the cars in position in front and behind the dumper.  The arm and carriage then move toward the dumper, taking the railcar with them.  The railcar is loaded into the barrel of the dumper like a vehicle into an automatic car wash.

Once the loaded railcar is secure inside the dumper, the arm and carriage are propelled backward to the far end of the next loaded car, in preparation for the next cycle.  During the disengage-return-reengage period, the dumper rotates and empties the car and returns to its seated position to await the next car.

While the positioner is operating, the train is completely controlled by the positioner and holding devices.  The system requires only one operator, usually stationed in an elevated cab near the dumper.

A train positioner may not appear overly important, but it saves time and eliminates the need to continually use a locomotive and its associated costs for personnel and expensive diesel fuel, just to position railcars in and out of a dumper.  And because a train positioner is electric or hydraulic, it provides a greener option to a diesel-powered locomotive.

Positioners can even have unique applications other than in conjunction with railcar dumpers.

For more information about the different types of train positioners offered by Heyl & Patterson, click here: 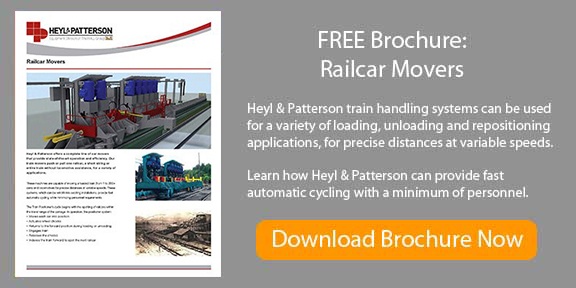