The Continuous Barge Unloader vs. the Grab Bucket Unloader 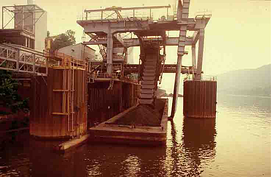 The first appearance of the Continuous Barge Unloader, or CBU, in the United States was in steel mill applications.  Although primarily used for iron ore offloading, the machines also saw early use as coal and coke unloaders.  Different styles of CBUs were applied to specific projects as determined by water level fluctuations, barge size and needed discharge capacities.  The CBU offered numerous advantages over the traditionally employed clamshell or grab bucket style barge unloader.

The advantages of the Continuous Barge Unloader include a much higher digging capacity, higher average unloading rates, better ease of operation and less spillage.  The grab bucket type unloader is used to achieve offloading rates of up to 1500 tons per hour.  The grab will usually average about 50% of the free digging rate over the entire barge.  This is due to the somewhat difficult and time-consuming method of cleanup.

On the other hand, the CBU offers a much higher average unloading rate than the grab.  Averages of 75-80% of the free digging rate have been experienced.  The CBU by nature of its design offered much quicker cleanup and higher peak capacities (2000-6000 short tons per hour).  The grab bucket unloader can allow spillage to dribble from the bucket lips, creating housekeeping problems at best and environmental concerns at worst.  Airborne dust can also be generated as the grab bucket opens and drops its load into the hopper. 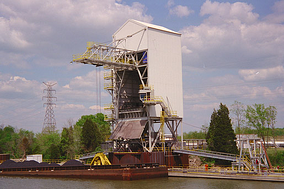 The CBU reduced much of the spillage and directed what spillage that did occur back into the barge.  Normally, the unloading operation of the CBU does not generate appreciable dust.  One potential drawback of the CBU is its inability to completely clean a barge without the assistance of another device.  Boxed-type barges, without raked ends, exacerbate this condition.  As a general rule, 1-1.5% of the total contents of a barge is left after unloading with the CBU.  In many mill applications, barges were only used for one commodity and the plant paid only for the tonnage offloaded, so total cleanup was not performed.

It should also be noted that the CBU is relatively immobile.  The grab bucket unloader can be mounted on tracks that allow it to run parallel to the shoreline, where the CBU is locked it position and barges must be positioned within its reach.  The CBU's only movement is its boom, as it traverses a barge from side to side in several different passes.

For the most part, the CBU was more attractive to steel mills that had a large number of barges to offload.  When power plants were built along rivers, they saw the advantages of the CBU and used the machines to offload critical supplies of coal.  Several utilities utilize the CBU to offload oceangoing barges containing up to 7000 tons per barge.  Terminal operators quickly followed suit.  The CBU was eventually used to empty barges containing diverse cargoes of coal, iron ore, coke, limestone, grain and wood chips.

Because all applications and site requirements are not created equal, Heyl & Patterson designs and manufactures both CBUs and grab bucket unloaders.  We also offer a complete line of replacement parts and upgrades, regardless of the original manufacturer.  Mechanical upgrades include buckets, lubrication systems and trolley wheels, while electrical upgrades include control systems, fiber optics and variable frequency drives. 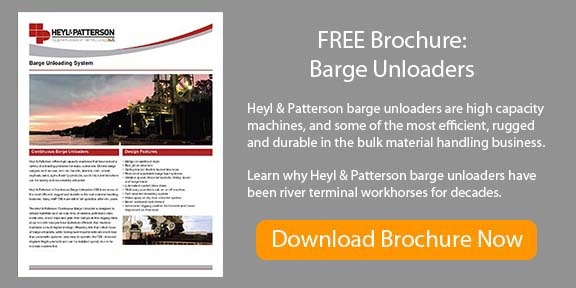