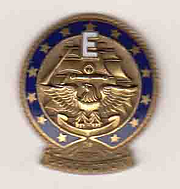 During World War II, the U.S. government utilized a system of production awards to acknowledge the efforts of manufacturing plants that provided much-needed materials for the war effort.  The Navy “E” Award was based on excellence in quality and quantity, overcoming production obstacles, fair labor standards, conserving critical and strategic materials, low absenteeism and effective management, among other considerations.  An honor not easily won nor lightly bestowed, this wartime honor recognized companies that consistently met high standards with available resources.

“E” Awards were granted to an individual manufacturing plant rather than a company as a whole, because different plants within a company responded to wartime needs differently.  The award consisted of a tapering flag, or burgee, to be flown over the plant and a lapel pin for every employee within the plant, both presented during a ceremony.  If a plant won the award more than once, stars were added to the flag for each additional win.

A total of 4,283 companies received the award in the course of the war, ranging from one-man shops to large corporations, and from facilities converted from peacetime production to new plants built specifically for war purposes.  The total number represented only 5% of the companies engaged in the war effort, and about half of the awards went to plants with fewer than 500 employees.

Heyl & Patterson became the sixth recipient of the Navy “E” Award in May 1942, having won the award by building three 25-ton traveling hammerhead cranes for the United States Navy Yard in Norfolk, Virginia.  These cranes were used to construct hundreds of naval vessels, which went into battle in the Atlantic and Pacific theaters.

Each hammerhead crane consisted of a steel-braced tower with a large horizontal cantilever revolving at its top.  The forward part of the cantilever (or jib) carried a lifting trolley, and the jib extended backwards to counter-balance the weight of the material being lifted.  In addition to the motions of lifting and revolving, there is a so-called "racking" motion, in which the lifting trolley with its suspended load could be moved in and out along the jib without altering the level of the load.  Such horizontal movement of the load is a marked feature of later crane design.  Crane operations are controlled from an operating house supported under the front portion of the horizontal cantilever, near the tower.

The ability of the hammerhead crane to lift heavy weight was useful for assembling large pieces of naval vessels and installing armor plate and gun barrels.  While the hammerhead cranes helped the Navy build ships, Heyl & Patterson also produced machinery to speed the production of steel for those ships:  turnover and rotary railcar dumpers, ore bridges, coal breakers and coke preparation plants.

Without Heyl & Patterson's engineering expertise, many soldiers could not have shipped out during the war.  It can even be said that H&P cranes built the Navy that won the war.  Because of our connection with World War II veterans, Heyl & Patterson recently donated to the construction of the Southwestern Pennsylvania World War II Memorial.  The memorial is being built on Pittsburgh's North Side, less than a mile from the facility where Heyl & Patterson fabricated the hammerhead cranes for the Navy.

This memorial will carry on the legacy of the great men and women who contributed so much to the war effort.  Heyl & Patterson made its donation "in honor of all those who served."

Access our Flickr page to see more images of our role in World War II.  To learn more about Heyl & Patterson as the company celebrates its 125th year in business, click here to subscribe to our blog: