The Bottom Dump Railcar vs. the Rotary Railcar Dumper 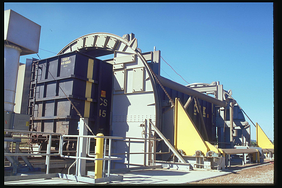 As railroad cars evolved, there needed to be a more efficient way to unload bulk materials from them than to use a shovel.  There were two obvious ways of improving the situation, and a debate began on the merits of “turning the whole car upside down” versus allowing the bulk materials to “fall out of the bottom.”

The thing common to both methods is a hole in the ground, and the equipment to carry the dumped material to the point of use.  Given this, the bottom dump railcar needs no other equipment to effect its unloading.  However, there is a price to pay in that the railcar must be shaped to facilitate the free flow of material and it must have outlets with gates that can be opened, closed and maintain tight seals over time.  If the materials inside the railcar become clumped or frozen, there is also the added effort and expense of removing them from the railcar.

What had been a simple “box on wheels” has now become a more expensive vehicle to build, maintain and operate.

Early dumpers, of which Heyl & Patterson had a part in developing, were actually designed to eliminate the hole in the ground.  Called high lift dumpers, they lived up to their name.  They lifted railcars to considerable heights before turning them over to discharge the contents directly into above-ground bunkers or another vehicle situated alongside the rail track.  They were massive and expensive machines, but required no modifications to any existing cars, and railway companies liked them.

This expense soon brought the dumper “down to earth,” with a side discharge machine that is still popular because it results in a receiving hopper of minimum depth.

It was quickly realized that the most economical way of inverting any mass was to rotate it about its center of gravity.  With this idea, the rotary dumper was born.  A recent example of this type of dumper is shown in the video above.  Although the receiving hopper disappeared further underground, the lower-power drive consumed, and the lighter structural weight of the machine tended to compensate in all but the worst soil conditions.

The rotary dumper led to the next significant development in the evolution of the railcar.  The center of gravity of the railcar is only slightly higher, and in the same vertical plane as the center of the coupler.  It eventually occurred to someone (who deserves much more credit than his lack of notoriety suggests that he received) that if the railcar was rotated about its own coupler, there would be no need to uncouple the cars to dump them.  This led to the development of the rotating coupling and the “unit train.”

Heyl & Patterson has been invested in turning railcars upside down for 90 years.  Our Rotary Railcar Dumpers are designed with state-of-the-art features and built-in flexibility, can include customized options and can handle random or unit train railcars.  Because we custom engineer each dumper and maintain the drawings, we can service any machine with upgrades or repairs according to its original specifications.  In fact, we can service any dumper, regardless of its original manufacturer.  Heyl & Patterson provides superior customer support before, during and after the purchase of every product we supply. 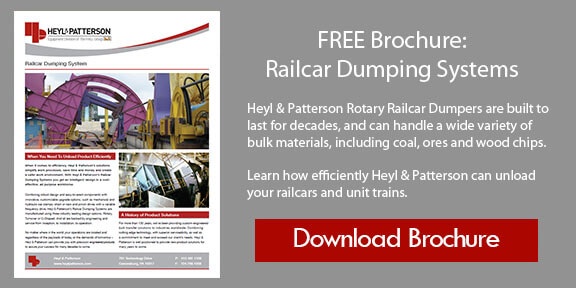